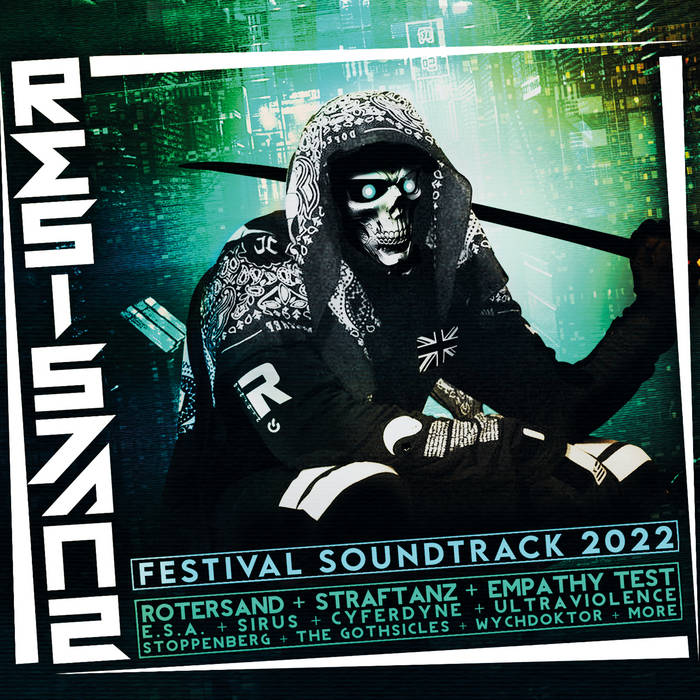 Resistanz Festival simply wouldn’t be Resistanz Festival without the annual agony of attempting to outdo all the previous compilations we have somehow managed to put together over the years – and this year’s effort, an even more torturous process than ever before thanks to two years of pandemic and ever-evolving line-ups, is no exception.

Is this the cream of the crop so far? Without wishing to overly mix metaphors, the proof of this particular pudding may be in the consumption of it. A veritable feast for the ears, we proudly present to you no fewer than 12 previously unreleased exclusive tracks begged, borrowed or commissioned from the vast majority of this year’s performers – including as ever some winning musical collaborations that might otherwise never have occurred.

Starting with STOPPENBERG – the brainchild of longtime DWA friend and collaborator Jan L (NOISUF-X/X-FUSION) – you get a literally “Brutal” beginning, followed by the first of a double-dose of Brian Graupner’s distinctive effervescent vocals as THE GOTHSICLES deliver their by now traditional exclusive ode to whichever festival they find themselves at.

Next up you have DWA’s own CYFERDYNE – with fellow festival attendees PROMENADE CINEMA offering their exclusive take on CYFERDYNE’s new single “Static”, and then Saturday night headliners ROTERSAND take on EMPATHY TEST’s “Empty Handed” and convert it into an instant club classic.

SIRUS are next to step up to the plate, with another original song first intended for the 2020 edition of Resistanz now updated and cheekily retitled “Twenty Twenty 2” – while after several wonderful remixes for us in the past we are pleased to finally have a completely new WYCHDOKTOR song for you, the pounding yet atmospheric “Idols”.

The youthful exuberance of Jan Lauströer’s ANTIBODY project meets its match in guest vocalist Brian Graupner’s inimitable energy and lyrical stylings for another exclusive collaboration, while MODULATE’s Geoff Lee – appearing among the DJs for this year’s event, then transforms E.S.A.’s “Burial 10” with a throbbing old-school EBM bassline for his KHURCH remix.

ULTRAVIOLENCE, who originally graced both festival and soundtrack album back in 2012 bring us a total reimagination of that 2012 track, now reconfigured as “Death Resistanz Electronic”, while locally-based emerging talents MACHINE WRAITH gift us an exclusive “Dirty Secret Mix” of a song from their upcoming new album.

And drawing this year’s epic compilation to a close – at least for the “standard” digital edition – we have MATT HART with an exclusive mix of “Judgement”, and the actual final act of the festival itself Sunday night headliners STRAFTANZ with a find from the vaults, their very last remaining previously unreleased material in the shape of a remix by fellow late-lamented DWA favourites LATEXXX TEENS. Dead band remixes dead band – you can’t say we didn’t pull out all the stops to provide an appropriate ending.

BUT actually that’s not all, if you are the kind of person that still prizes physical media – because the ultimate musical souvenir of this year’s Resistanz Festival will of course be one of the ultra-limited CD copies, coming this year on eye-catching black-based discs in 4-panel eco-paks exquisitely designed like the festival posters and t-shirts by our very own Vlad McNeally.
And found at the very end of said CD are a further 2 tracks which although already available digitally have never found their way onto any CD before – J:DEAD’s collaboration with TEKNOVORE, and WYCHDOKTOR’s mash-up of his own “Forked Tongue” with E.S.A.’s “Hold Your Tongue”, both of which we are pleased to include as CD-only bonus tracks for your extended listening pleasure.

The album can be pre-ordered from all major streaming and download platforms from today, including of course here from our Bandcamp-hosted webstore where you can gain the additional benefit of immediate free download of the day’s featured track while you wait for the actual release date – which will be April 15 (we will be adding further track previews daily between now and Resistanz itself).
Limited quantities of the CD can be obtained exclusively at Resistanz Festival prior to the general release date which is May 6. PLEASE NOTE that in the case of CD copies, online sales are strictly PREORDER ONLY from today up until May 6 (due to the DWA webstore remaining generally closed)…