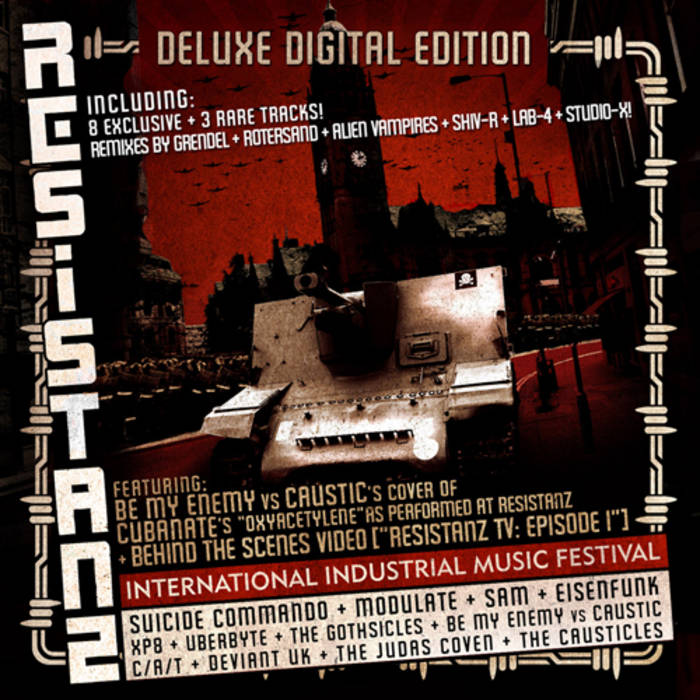 khyzer All of the tracks are worth a listen especially the Cubanate cover Oxyacetylene and Deviant UK s Wreckhead remix , all in all a good buy Favorite track: Oxyacetylene.

“Resistanz” is the official compilation album for the UK’s newest and most exciting industrial festival – which in April 2011 gathered together leading alternative electronic artists from the US, UK and Europe!
The album includes remixes from GRENDEL, ALIEN VAMPIRES, ROTERSAND, SHIV-R and STUDIO-X – and contains 8 exclusive and 3 rare tracks, many made specifically for this compilation!

As the proud main sponsor of the “Resistanz” festival – held in Sheffield UK on April 2nd and 3rd 2011 - DWA worked for months behind the scenes, liasing with various acts to assemble the most memorable compilation album possible to commemorate this awesome event.

- Resistanz Saturday night headliner SUICIDE COMMANDO: with an exclusive remix of the track “Go Fuck Yourself” (from the latest single “Death Cures All Pain”) made especially for this compilation by ALIEN VAMPIRES

- A freshly re-mastered version of ROTERSAND’s remix of XP8’s “Want It”, and SHIV-R’s remix of SAM’s “Halluzinogen”: both previously available only in Japan

– A previously-unreleased LAB 4 remix of THE JUDAS COVEN from LAB 4/THE JUDAS COVEN’s A+D+A+M: special guest DJ in the hardstyle room on the Sunday night of Resistanz!

- A specially-recorded cover version of CUBANATE's classic "Oxyacetylene" by CAUSTIC and BE MY ENEMY: as performed live during CAUSTIC's set at Resistanz!

Mastering for this album was carried out by Kolja Trelle (SOMAN) at Koltron Music Production, while the Sheffield-themed artwork - drawn from iconic landmarks of the area for an authentic local flavour! - was designed by Vlad McNeally of Kallisti Design (DETROIT DIESEL, SHIV-R, REAXION GUERRILLA, NACHTMAHR).

The strictly limited CD edition of 500 copies, “Resistanz” with 6-page booklet (and including 2 different tracks) is on general release now!