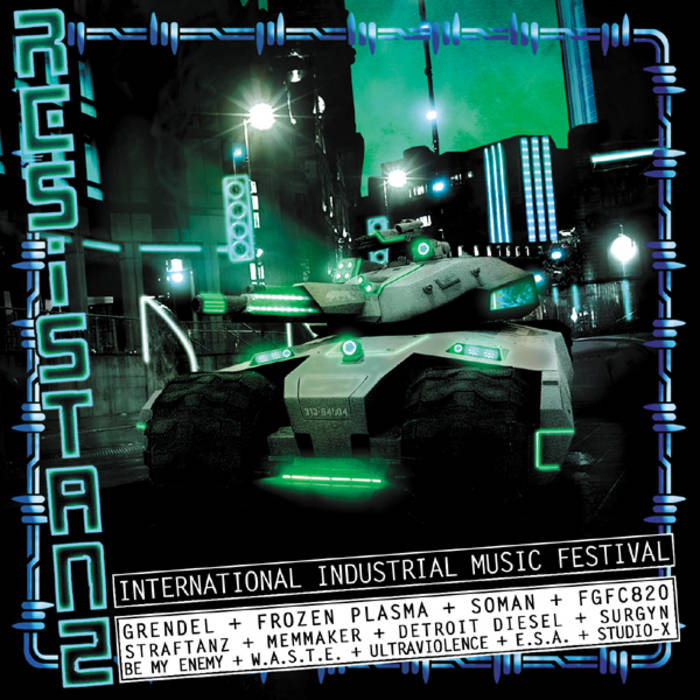 One does not simply make an album for Resistanz.
12 exclusive tracks.
2 rare tracks.
Multiple collaborations.
Festival compilation album of the year?
Could be....

One does not simply make a festival as good as Resistanz .
So clearly one does not simply make an album for Resistanz.
Like the amount of thought that goes into the festival itself, compiling the album of the festival is by necessity an equally taxing and complex task.
Because yes, it would be easy enough to simply throw together a few tracks and call that an album.
But getting artists together instead, in order to generate exclusive Resistanz-only collaborations and remixes – that is an entirely different matter and far more difficult to pull off.

Can Resistanz 2012 top the dizzying heights of Resistanz 2011 – one of the most highly-praised debuts of an industrial music festival ever? Only YOU can tell – by being there this April 7th and 8th, at Sheffield’s Corporation!
But can the Resistanz 2012 album top the 2011 version?
We humbly submit that it can and does!

- new Scottish dark-electro sensation SURGYN pair up with both SEBASTIAN KOMOR of ICON OF COIL and FGFC820 to create 2 completely different interpretations of specially-written song “Resist!”…where the boys even sing in German!

- new GRENDEL track “Wheels In Motion” is given a once-over by one of the revelations of last year’s Resistanz, SAM

- American noise-merchants W.A.S.T.E. – heading in like FGFC820 for their UK live debut at Resistanz – deliver the specially-composed and filth-laden “Droppin’ Loads For Resistanz”

- unable to make it for their scheduled performance at Resistanz 2012, Australian hardstyle act STUDIO-X had already recorded their “Resistanz Anthem” – which is too good to leave out, even if the band themselves can’t appear at the event, so it comes as a bonus track

- narrowly missing out on winning the E.S.A. remix competition, CEDIGEST’s alter-ego RUINIZER’s version of “Themes Of Carnal Empowerment” is similarly too good to go to waste, and is included as “runner-up”

Jointly mastered by DWA’s regular engineers in Germany Jan L (X-FUSION/NOISUF-X) and Kolja Trelle (SOMAN), “Resistanz 2012” is presented in 4-panel digipak as a limited edition of 300 copies – with Sheffield-themed artwork like last year from the mind of DWA’s head designer Vlad McNeally.

The limited edition CD is released on April 7th, to coincide with the festival itself, with pre-orders shipping around March 30th.
Pre-order – including FREE digital download of the album – is open NOW at 20% off.
Only want the digital version? No problem – that is also available NOW!