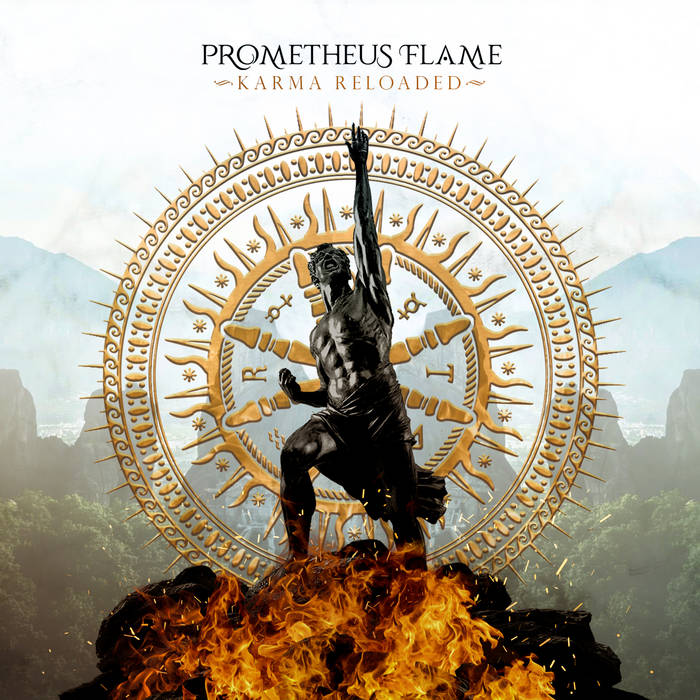 Among the many CD limited edition DWA titles to sell out since the start of 2020 was this surprise package, the debut album “Karma Reloaded” from brand new Greek outfit PROMETHEUS FLAME (mainly, it should be added, in Germany – where it dominated the Poponaut online store’s sales charts for several weeks).

Consequently, while coronavirus has been raging around the world, we took the opportunity to source some additional audio content from some of our well-known friends stuck in lockdown – in this instance GRENDEL and ROTERSAND, whose remixes now round out the bonus section of this newly formatted “Extended Edition” of “Karma Reloaded”, alongside one from cult Greek electronic act IAMBIA!

On the artwork front, freshly produced promo photos were given the once over by our lead designer Vlad McNeally, and form the background of the 12-page booklet – which also includes, naturally, all the lyrics of the album presented for the first time in print.

For anyone who missed out on the original digipak limited edition (which sold out in literally less than 3 months) or who simply wants either the lyric booklet, remixes or a second copy for posterity this “Karma Reloaded – Extended Edition” will be released July 10 in a hand-numbered, strictly limited run of 100 copies

It has been some years now since any completely new act was signed to DWA – preference being given instead to established artists with whom we already had some kind of working relationship. Many hopefuls have enquired, of course – but all had to find a home elsewhere, until now…

Clearly it would take an album of some significant quality to get through the gates – so without further ado ladies and gentlemen let us present to you the one that finally has: “Karma Reloaded” from a completely new name in electro-industrial PROMETHEUS FLAME.

Comprised from start to finish of sumptuous songwriting and a pristine production quality which completely belies its status as a debut album, “Karma Reloaded” is packed with club classics and resonates with the lush musical aesthetic of the golden age of dark electro without ever sounding anything other than completely modern.

While new acts traditionally struggle to gain traction and acceptance, we anticipate that the sheer quality and musical maturity of “Karma Reloaded” will immediately win fans for PROMETHEUS FLAME from among those of the likes of FRONT 242, VNV NATION, ROTERSAND and so on...and so it has proven!