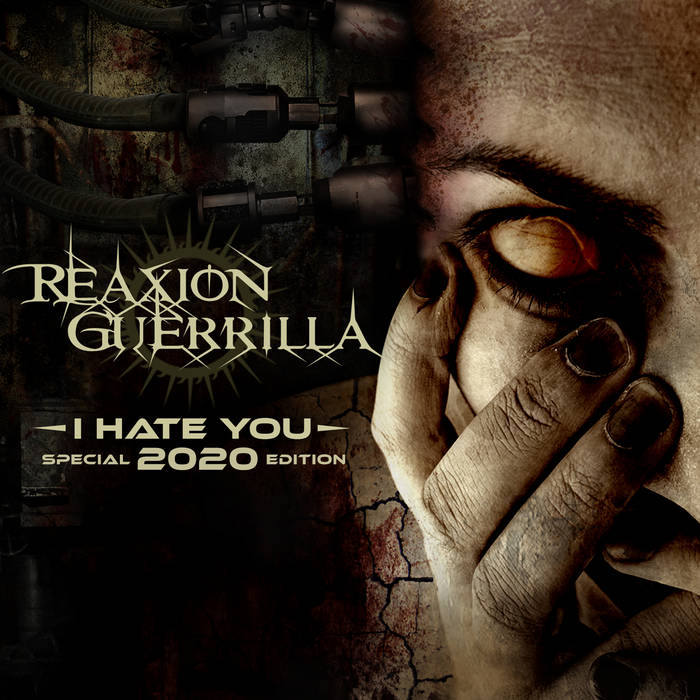 Ace of Tunes There is something viscerally pleasing about this album. It has great rhythms and hard bass. The audio samples are fantastic. It is dark and dirty and sexy.

While technically speaking our first ever release was way back in 2005, here at DWA we regard the “real start” of the label to be 2010 – the year we started signing and sub-licensing our first international acts. 2020 then is what we regard as being our 10th anniversary – and what better way to celebrate that than by taking you all the way back in time to 2010 itself, with a Special 2020 Edition of the seminal aggrotech album that started it all, “I Hate You” by REAXION GUERRILLA!

Spawned in 2007, REAXION GUERRILLA rapidly made a name for themselves opening for bands like HOCICO, AMDUSCIA, FGFC820, NACHTMAHR, DAWN OF ASHES and PSYCLON NINE in their homeland Peru, Mexico and the US, becoming the best-known export of the South American scene if not one of the most influential across all Latin America. Appearances on various scene compilations brought them to DWA’s attention and the rest is history.

“I Hate You” was one of the first albums mastered and designed for us by long-time colleagues Jan L of NOISUF-X/X-FUSION and Vlad McNeally of KALLISTI:DESIGN, both of whom ended up with us for the duration. The original DWA release rapidly sold out of its limited edition run, despite being simultaneously sublicensed by us to Infacted Recordings for a European edition, and was later reissued in North America by DWA in collaboration with Philadelphia-based label Industry8…

With all versions of “I Hate You” long sold out and all material long since deleted from all digital platforms, what better place to start our occasional series of classic reissues for 2020 than right here in collaboration with REAXION GUERRILLA – to produce a Special 2020 Edition of this assured debut album as only DWA knows how!

Coming in digipak, with integral 8-page booklet containing the previously unpublished lyrics, “I Hate You – Special 2020 Edition” is strictly limited to 100 copies worldwide – and includes as bonus tracks 3 versions of the club classic “Psycho Destruxion (featuring guest vocals from JOHAN VAN ROY of SUICIDE COMMANDO) and title track not found on the original.

With REAXION GUERRILLA poised to finally unleash their first new material in nearly a decade, and both “I Hate You” and DWA turning 10 years old this year – not to mention pretty much everyone on the planet feeling “I Hate You 2020” - the timing could never be more appropriate to re-release and rediscover this timeless classic of the harsh-EBM sub-genre!